One of the most challenging things for me is to explain to people what I was actually doing in Mozambique. Officially, I was an advisor for e-learning at a local university. So far, so good. However, what impact does such a project have on the sustainable development of a country? Do people in Mozambique have computers to go and study online? Isn’t it an elitist approach to create online courses for the lucky few who have the means and the infrastructure to participate? Wouldn’t it be more beneficial to address the general literacy in the country (which is currently estimated at 58.8 % among the total population, 45.4 % among women according to the World Fact Book) before discussing web literacy?

Each remark justifies a very interesting discussion for itself. Yet, I am not attempting the large (and super-interesting!) field of ICT for Development (ICT4D) scientifically. Instead, I will reflect on a couple of personal observations and experiences that represent important aspects of a very complex and multilayered reality.

What’s up, Africa? WhatsApp is up!

Probably the most important observation to understand the ICT structure of Mozambique (and presumably most other African countries) is the omnipresence of mobile phones in comparison to desktop and laptop computers. A while ago, I wrote about mobile providers, state of the infrastructure, and costs in another blog posting. Voice credits and data packages, are available widely, for reasonable prices – and in a “scalable” manner. While a European telecom consumer probably wonders why someone would buy phone credits for 50 Cents every other day instead of spending 7 Euros for an entire month, it makes perfect sense for a fruit trader with varying daily income who usually doesn’t have 7 Euros at disposal at once.

Buying and activating a SIM card on the streets of Beira

With a Chinese mobile phone in 2017, one can do more things than with a high-end Personal Computer 20 years ago. Let’s talk about WhatsApp. I never thought of WhatsApp as an education technology – until I met some kids in a remote village in the province of Manica, close to the Zimbabwean border. My Portuguese was very basic , but I managed to teach them the English phrases they asked me for – and send them the transcriptions on WhatsApp so they could revise and practise. It was them who asked me for that as well.
I also came across WhatsApp in formal education – at universities which had never implemented email distribution lists, but are now using WhatsApp groups where students can ask their professors questions about assignments and other stuff.

So…why WhatsApp, and not Facebook, or Skype, or good ol’ Hotmail? I could not explain it any better than Toby Shapshak, technology writer and TED speaker from South Africa:

“WhatsApp’s hidden beauty is how little data it uses – something the tech industry based in bandwidth-rich Silicon Valley often fails to understand about the bandwidth constraints in emerging markets, even if Africa’s internet is the fastest growing in the world. And, very importantly, Africa is a mobile-only continent. Because mobile data is so expensive, there is a natural adversity to using data-intensive services like YouTube. WhatsApp, with its tight compression, means videos won’t break the bank for cellphone users.” (Quoted from the Forbes article Why WhatsApp is South Africa’s favourite app, September 2015)

Another observation is not directly related to Mozambique, but significant for ICTs and online learning in emerging markets. Since 2012, I have completed several courses on Udacity, and recently even enrolled in a Nanodegree. Udacity has been founded by a Google engineer. It is “pure Silicon Valley”. And at the same time, it isn’t. In 2012, the second largest group of students (7 %) were from India. Coursera, another major MOOC platform, reported 6 % of its users being from Brazil in the same year. (Find more details here.) That’s only numbers, of course. But as a student, I can also feel a certain shift in course materials, examples given in courses, and most importantly, forum discussions among the learning community. Movie database examples feature recent Bollywood productions as templates. Assignments for mobile apps programmed by students take Mandarin keyboards into consideration. And participants proactively organise face-to-face get-togethers – in Mumbai, Nanjing, and São Paulo.

It is true: A Nanodegree at Udacity requires money, time, fast internet, and a relatively good laptop. Same goes for online curricula in South Africa, Mozambique, and other countries. Such offers do not reach – and are not addressed to – underprivileged, rural communities at all. But they enable something else: high quality, up-to-date education and information for a population stratum that is often referred to the as “new middle class”. And whilst certainly not every well-educated, modestly wealthy, urban Mozambican will dedicate their life to the multiplying effect of distributing skills and knowledge to less privileged compatriots…I am deeply convinced that it is this group of teachers, doctors, enigneers, and entrepreneurs, who has the ability to tackle sustainable development way better than any “Western” NGO or missionary has ever done.

One example: Distance learning programs for teachers in remote areas of Central Mozambique. We are talking about teachers that have already been practising for years, and probably already made hell of a difference in their respective villages. However, they never had an opportunity to get formal education, let alone brush up their knowledge and skills on a regular basis. With learning materials on paper, being distributed by universities every other month, they finally get that opportunity for a (semi-)academic education. And learning technologies – be it tutorials with professors via WhatsApp, video lectures, or simply the possibility to look up facts on Wikipedia – can facilitate such education programs and help improve the quality enormously. Quality that trickels through to rural schools and communities. This is exactly what my university – the Universidade Católica de Moçambique – is doing and what my project was contributing to. It definitely is a long way to go. But it is a way that must not be ignored or neglected. 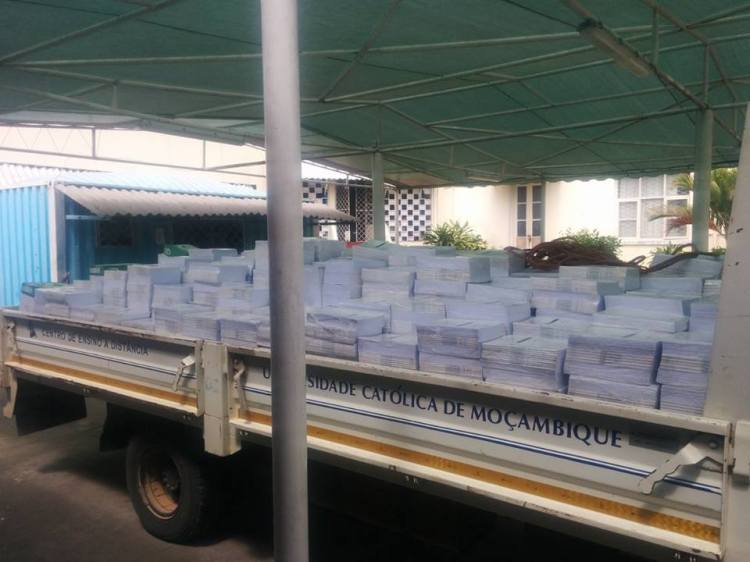 Distance Learning in Mozambique – state of the art

And then there is Brazil…

As an advisor at an African university, I had to do with several international cooperations – most of them with…guess whom…Brazil.

Why Brazil? First of all, it’s the language, of course. But why not Portugal? Of course relations with Portugal play a huge role in Mozambican economy, education, and also every day life (yes – in July 2016, everyone in Beira was cheering for the new European champions)…but to some extent, Brazilian reality might “understand” Mozambican reality better, at least when it comes to IT-related topics. Brazilian institutions and advisors naturally know what it means to deal with real distances, with really remote areas, with weak infrastructure, with multicultural and multilingual audiences. I remember several projects where Mozambican universities turned to Brazilian universities for advise when it came to the implementation of ICT systems – and I realised that many Brazilian systems had another major advantage compared to what European universities could have offered: The whole process of adopting and implementing learning technologies has started several years later in Brasil than it did in Europe. Hence Brazilian institutions could base their strategies on more advanced technologies, and possibly also on clearer requirements catalogues than European organisations which started experimenting with newly born open source versions in the early 2000s, years before new paradigms like Web 2.0 came to life. And we are still confronted with the results today, such as heavy “historical” bulk and overly complicated, historically grown island solutions.

So, to some extent, many Brazilian solutions I came across appeared much “cleaner”, more lightweight, than what I am used to from Europe – regardless if they were commercial or open-source-based. Why would an African university copy bulky European solutions when they can “leapfrog” to the state of the art that fulfills their current requirements?

I believe the most important aspect about ICTs in emerging and developing areas is that, like everywhere in the world, they are a part of reality. The context and circumstances of their diffusion and adoption might be different (and very specific for each country, each region, each social stratum), but their existance is a fact. And like everywhere in the world, ICTs have can – and are used to – enable learning and education.

I don’t have a ready-made answer to the solution if and how ICTs will change education in Mozambique in the long term. I don’t have that for Europe either. But I believe that it would be a mistake to try zoom out the existence of digital technologies in the field of education – or any other field, that is, because at the end of the day, they cannot and must not be ignored.

Province of Manica – where everyone communicates via WhatsApp