While many countries in the world celebrate international women’s day on March 8, Mozambique does it differently and honours its women every year on April 7, a Dia da Mulher Moçambicana (literal translation “Day of the Mozambican Woman”).

It is a public holiday (and before anyone asks the obvious question: Yes, also men get the day off), and remembers one of the most influential women in Mozambican history: Josina Machel. 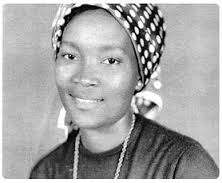 Born in 1945 in Vilanculos, Inhambane province, she grew up while the opposition to the colonial administration by Portugal slowly grew among the native population of Mozambique. As a teenager, she tried to join the – then illegal – liberation movement, which was based in neighbouring Tanzania, Frente de Liberação de Moçambique (FRELIMO), was sent to jail and deported between Southern African countries several times, until she finally managed to get into the movement when the independence war had already broken out in 1964. She continously took over more and more responsibilities until she became head of FRELIMO’s Department of Social Affairs, dedicating her capacities to causes such as Women’s Rights, child care, education centers, and specifically, education initiatives for girls. Even though she died very young, aged 25, she strongly impacted the social programs and strategies of Mozambique during the war and after independence, and is considered a key figure of the global feminist movement.
Josina – who was, by the way, also the wife of Samora Machel, who would become the first president of the Republic after independance – died on April 7 1971, and her day of death was declared Mozambican Women’s Day two years later, in 1973.

April 7 – A national holiday to pay tribute to women

Nowadays, the day is celebrated throughout the country with events, manifestations, concerts and festivities especially designed and carried out for women.
Unfortunately, this year Beira was hit by a devestating storm the night before and also during April 7 itself, and I was not able to participate in any special events. However, the upcoming day of honour had been in the air for days beforehand already. Special Capulanas and T-Shirts printed and sold in the streets, organisations and businesses expressing their best wishes to all the women of the country, social media full of tributes to famous women and everyday heroines – and even I woke up on April 7, finding several text messages from male Mozambican friends, wishing me a happy day. 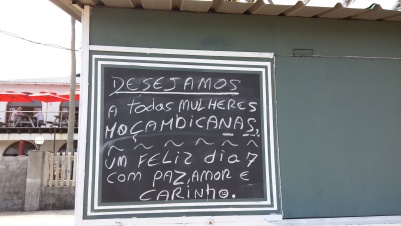 Message for women at a snackbar in Beira

Capulana, Women’s Day Edition
There is no doubt that life is not easy for Mozambican women. CIA and other sources provide devastating statistics, prove that women are still strongly disfavoured in many aspects – literacy rates, life expectancy, AIDS prevalence, risk of poverty, schooling…the list could be continued. Patriarchal traditions that are still manifest in many people’s minds and every-day-life are a fact as well. However, on the other hand side, I see and feel that Women’s Rights, Gender Equality and related subjects are present in public discourses, media and campaigns, and that awareness is growing. Before Easter, I had the chance to participate in a workshop for university teachers. They were trained to teach a subject that every student has to take in their first year and where sensitive topics like healthy relationships, contraception, and HIV/AIDS, are discussed and processed in highly innovative, honest and appropriate ways.
And for me, the fact alone that a country pays tribute to its female population with a national holiday full of excessive celebrations carries an impressive symbolic meaning that goes beyond what I know from many European cultures.

In that spirit, I also dedicated yesterday, April 7 2016, to all the great women of Mozambique – the ones that have shaped today’s society on a high level, like Josina Machel, but also the countless friends, colleagues, neighbours, or random strangers that I had the honour to meet here. The photo collage on top consists of images that I have taken during the past few months, capturing only few of the many strong, beautiful, positive, energetic women I have come across in Mozambique.

One thought on “April 7: Mozambican women in the spotlight”